Quoth the late, great Notorious B.I.G., “I don’t know what, they want from me / It’s like the more money we come across / The more problems we see.” As an entrepreneur with a thriving business, Biggie waxed poetic on the ever-increasing difficulty of managing one’s affairs as the size and scope of one’s operation increases.

The DIY entrepreneurial spirit and flying-by-the-seat-of-your-pantsness of running a small business will only get you so far. Nobody ever really explains to you that the mo’ better you do at running your business, the mo’ difficult it gets to figure it out on your own. If you’re lucky (and good), the problems you never knew you had won’t come back to bite you… or if they do, hopefully not too hard. Obviously it’s impossible to negate all of the risk of your business, but what you can control is how much damage it will do.

One of the most important tools in your damage control toolbox comes from the shockingly unsexy world of corporate restructuring. It sounds fancy, but it’s really just another example of lawyer and accountant dweebs trying to make what we do sound impressive. Corporate restructuring means assembling a series of business entities and contracts to limit how much of your businesses’ money and assets are exposed to creditors.

Creditors are anyone your business owes money to. They can be anyone from an unpaid supplier, to a jilted landlord, to a former employee, to someone who wins a lawsuit against your business. The potential liabilities – or the amount of money you could owe creditors if things go bad – can be hefty. Say you’re opening a second location for your business. Your corporation signs a 5 year lease with a landlord for $3,000.00 per month. That’s $36,000.00 per year in rent. If the second location goes out of business after 1 year, you could still be on the hook for $144,000.00 in unpaid rent. The landlord can go after your surviving location to pay the debts from the failed one. That would suck.

A well planned and implemented corporate restructuring can protect the assets of one part of your business from the risks of another. At the heart of this lawyerly magic is something called a “holding company” – or a HoldCo.

What is a Holding Company?

A HoldCo is a corporation that doesn’t do anything other than own shares of other corporations. It’s a corporate shareholder, and nothing else. It’s called a holding company because it “holds” the shares, and it also holds on to & invests the profits that come along with those shares.

A corporation that actually does business (making/selling goods, providing services, etc) is known as an “operating company” – or an OpCo – when it’s owned by a HoldCo. A HoldCo can own all or part of one, or many OpCos, or even other HoldCos.

Profits are paid from the OpCo to the HoldCo by a dividend, which is a payout of the after-tax profits of a corporation to its owners. In Canada, dividends paid by an OpCo to a HoldCo that owns its shares are generally not taxed. This means that instead of holding a bunch of cash in your OpCo, you can hold it in the HoldCo instead, without paying more tax on it.

It may seem goofy to move the cash out of your business – after all, you may need it again. The problem is that any cash in the business is an asset that can be used to pay your creditors. Once cash is moved to the HoldCo, it no longer belongs to the OpCo. Obviously you can’t use this to hide money from creditors you already have or know about – that would be fraud, and also a dick move – but if you do it in the ordinary course of business, it’s allowed. It’s called “creditor proofing”. The OpCo only hangs on to the money it needs to run the company, and the rest is paid by dividend to your HoldCo.

Secondly, if you’ve got multiple businesses, or multiple locations of the same business, the HoldCo makes it really easy to move money between the two without paying more taxes. Since corporate tax rates are generally lower than personal tax rates, using dividends from one OpCo to fund another OpCo, rather than investing your personal after-tax income means you have more to invest.

You can also keep money in the HoldCo indefinitely, or pay yourself slowly over time to keep your personal taxes to a minimum.

Every business is different, and should be set up in a way that’s designed just for it. There is no silver bullet answer. There are two approaches that I see the most often in small businesses which I’ll use as examples: 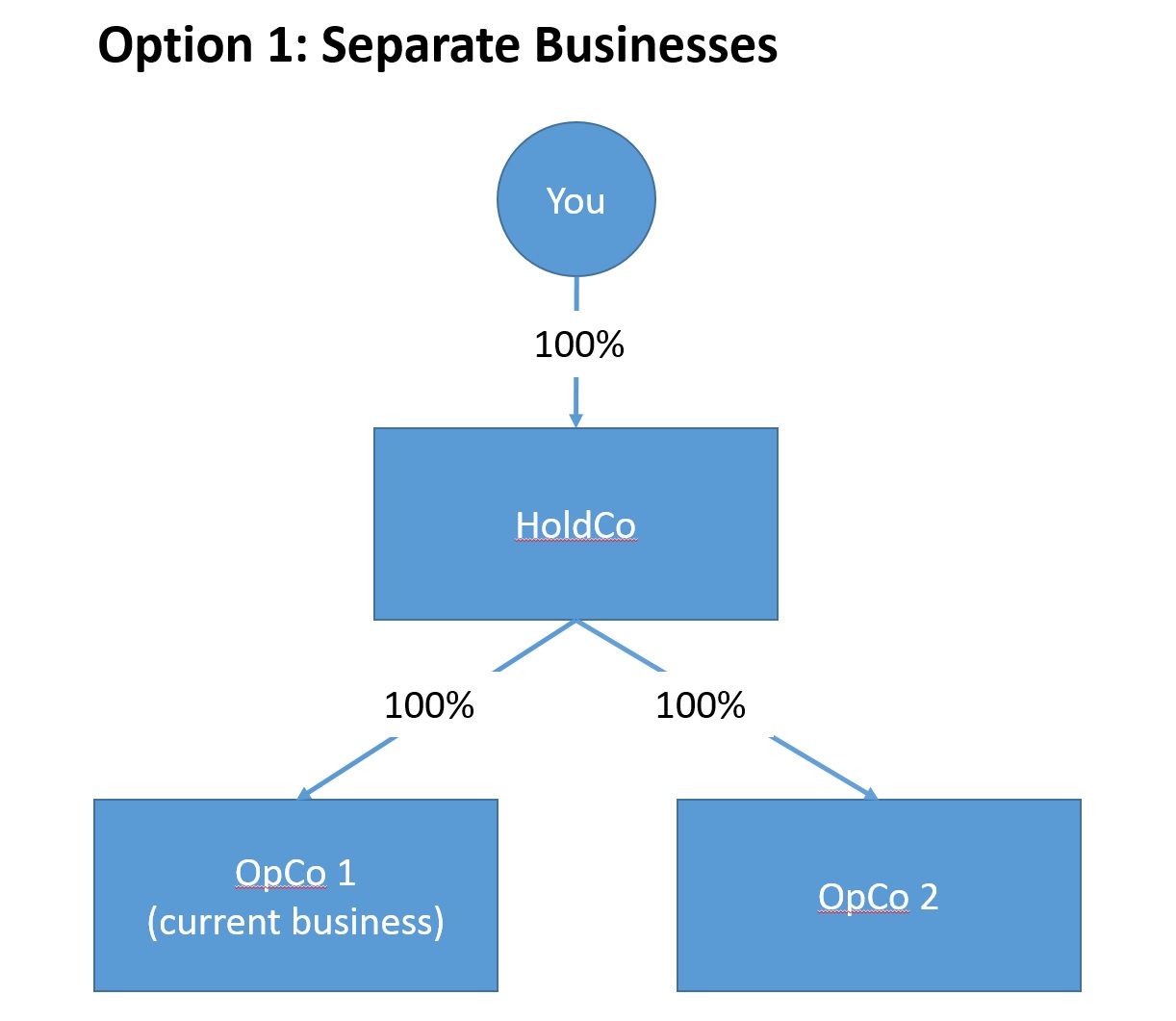 Simple, compared to Option 2. This means that it’s cheaper to set up and run.

It separates the assets and liabilities of each separate business, or each location or division of your business. If OpCo2 gets sued by its landlord for $144,000.00, the landlord can’t go after OpCo1 or the HoldCo for payment, because they’re separate businesses.

Money. For a small business, the legal and accounting work to set it up can range from thousands to tens of thousands of dollars. It costs more to run it too – each corporation needs its own bank account, tax numbers, bookkeeping, tax return, legal work, and insurance policies, to name a few.

Also, the assets of each OpCo stay in the business, and within reach of its creditors. For businesses with lots of equipment or inventory, that could be a whole lot of value left exposed.

This structure is most common in businesses where there aren’t a lot of hard assets – like services businesses – or in real estate investing, where the property is the business, and can’t be effectively separated. 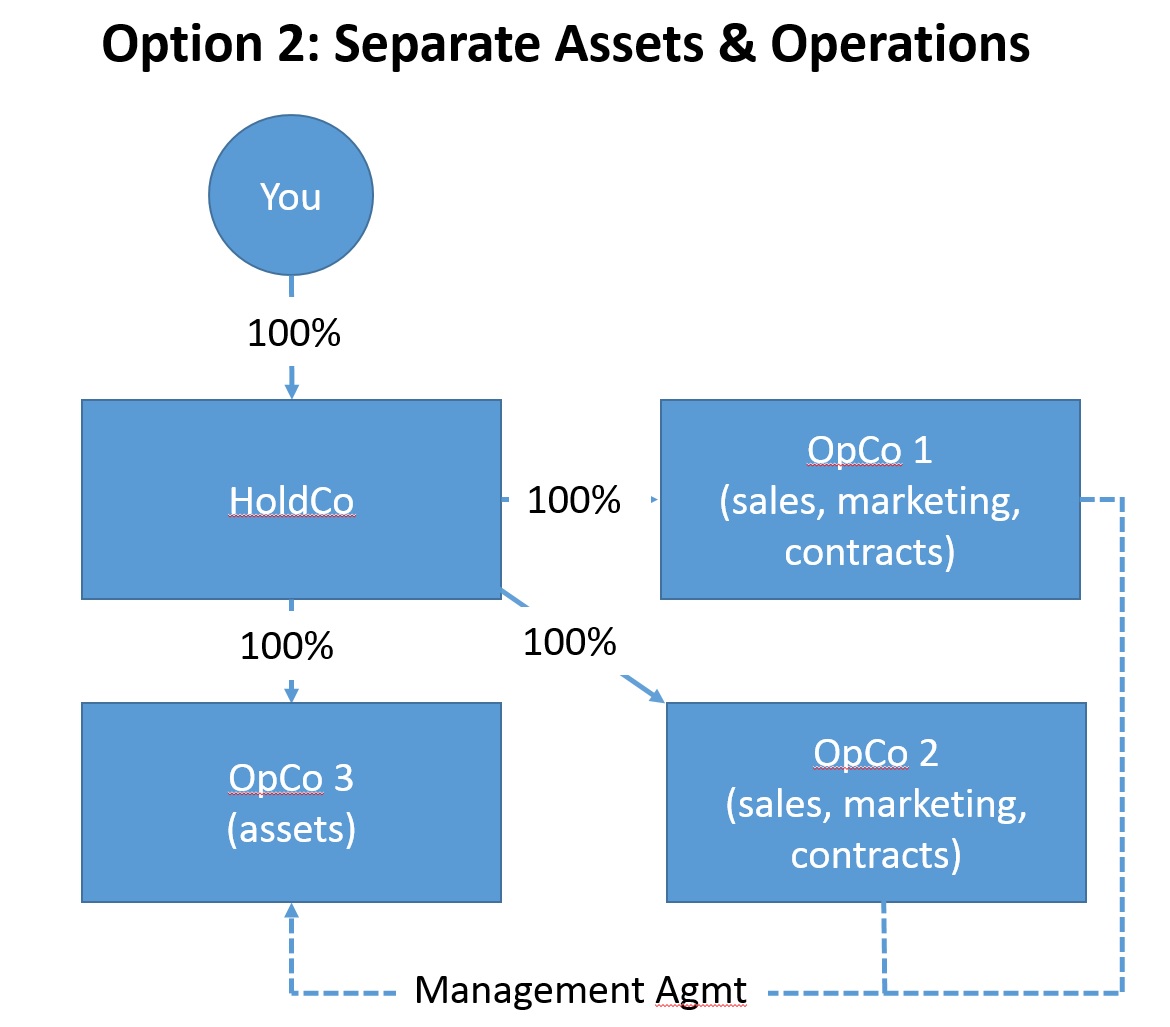 Here, OpCo1 and OpCo2 are the true operating businesses. They take on all of the business liabilities – like hiring the employees, making the products, taking customer orders, signing contracts, and so forth – but don’t actually own the valuable assets. OpCo3 owns all of the valuable assets – equipment, machinery, and sometimes inventory – and rents them to OpCo1 and OpCo2 to use.

Since OpCo3 doesn’t deal with anyone other than 1 & 2, and OpCo1 & 2 are the only ones dealing with the outside world, the valuable assets are generally out of reach of the creditors of the business. Creditors can go after the profits of 1 & 2, but they have no legal relationship with OpCo3, so have no claim against its assets.

Otherwise, it works pretty much the same way as Option 1.

Also, you run the risk that the money being paid from OpCo 1 & 2 to OpCo 3 for the use of the assets could be called passive income by the CRA – and taxed at a much higher rate than ordinary corporate income. This is where a good accountant earns their keep.

In some highly regulated businesses, the terms of licenses, permits, or government authorizations may prevent you from using this structure at all.

This is most common where there is a lot of expensive equipment, or a great deal of inventory in the business – like resource extraction, manufacturing, transportation, or construction. A similar model can also be used by a business with multiple locations, but centralized management.

If you’re going to do this stuff, you’d better not half-ass it. The process of setting it all up and running it, though it may seem like overly technical, tedious legal mumbo-jumbo, is absolutely critical. This is the type of stuff that the CRA will look at in detail if you’re ever audited. Even worse than that is the possibility that you may think your assets are protected when they’re not.

There are huge benefits – tax, asset protection, and your peace of mind as a business owner foremost among them – to using these structures. If you’re going to have access to those benefits, the CRA and courts of law will require you to have done everything correctly.

A few critical factors are:

While it’s not rocket surgery, it’s certainly not something I recommend as a DIY project. If you’ve got a business with multiple locations, different divisions doing different things, or own pieces of a few different businesses, there’s no time like the present to square this away. If you need help along the way, I happen to know a guy…